Assessing Solana’s collapse in price and what the future holds

Perhaps no coin symbolises the rollercoaster ride of crypto better than Solana (SOL).

It’s been a journey filled with meteoric highs and crushing lows – so let’s dive in to exactly what has happened over the last year, and what the future holds for Solana.

The phrase “Ethereum-killer” gets thrown around a lot in crypto. For the most part, I roll my eyes. Sure, ETH has its fair share of problems. Even amid the recent parabolic rise in oil prices, gas in the real world still looks like a bargain compared to Ethereum. Given the extent of these fees, it has very much become the blockchain of the elites, with transactions completely unfeasible unless in very large amounts. 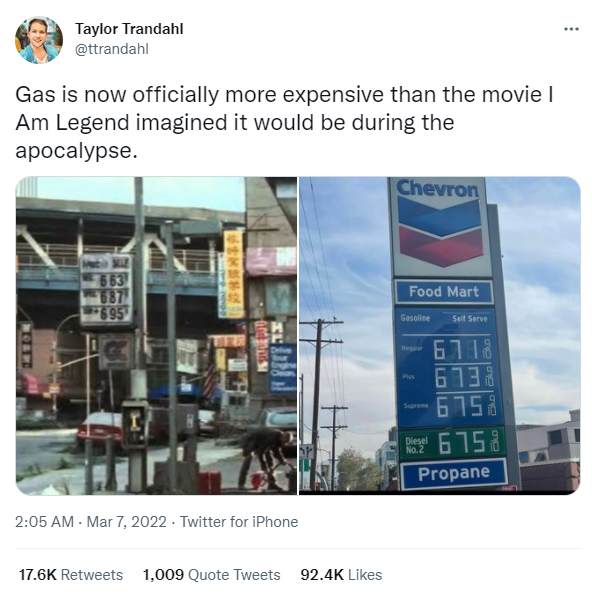 Still cheaper than Ethereum though…

Having said that, the network effects and first mover advantage within DeFi cannot be overstated here. There is a colossal $108 billion of TVL in Ethereum, and until further notice, it remains very much the DeFi leader. With the transition to Proof-of-Stake and ETH 2.0 set to address a lot of the issues, there is also a very real plan here with regards to the future. So calling every other new coin the “ETH-killer” doesn’t really cause me much excitement. 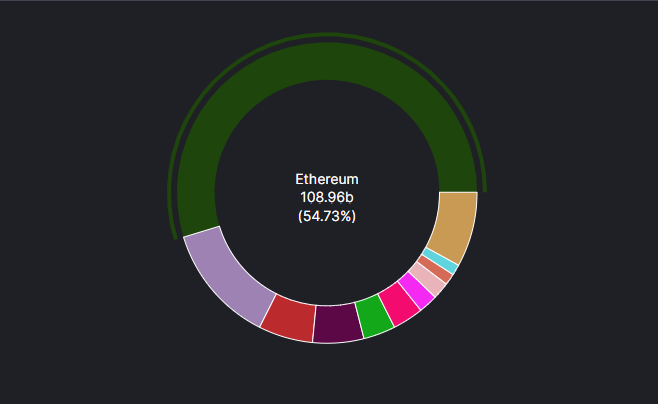 Ethereum’s dominance: a 54% share of total value locked in the DeFi space, Chart via DefiLlama

For Solana, however, it was different. Wanting to play around with NFTs for fun, but refusing to auction the shirt on my back to fund gas fees on the Ethereum-based OpenSea, I decided to dabble with Solana. It was my first time properly using SOL, and I was immediately hooked. Connecting my Phantom wallet to Chrome, I was able to instantly transfer SOL from an exchange wallet – and I think I paid 5 cents in fees. It was smooth, intuitive and so unbelievably refreshing compared to what I was used to on Ethereum.

To properly indulge, I bought a SOLPunk NFT on the marketplace Solanart. These were imitations of the famous CryptoPunks on Ethereum, at the time the most expensive NFTs around (since surpassed by Bored Ape Yacht Club). Identical to their Ethereum counterparts, but with an aesthetically-pleasing purple gradient background to represent Solana, it was a lot of fun. Ye, its not an OG on the Ethereum blockchain, but hey – do you know how much gas I paid? I then started flipping them, buying and selling to try scalp some extra Solana and trade up to a cooler one. It was what crypto should be – accessible, easy to use, cheap and….fun. I joined the Discord group – a warm and welcoming community. I started thinking Solana was here to stay.

A collection of SOLPunk NFTs from Solanart. I have a soft spot for these, I have to admit

Of course, I was still a bandwagoner. Despite this being last year, less than 18 months after Solana was launched in April 2020, Solana was already the talk of the town. This young coin, one year old, had mushroomed in value, trading at $130 at the time. It had tripled in a matter of weeks; its market cap was $37 billion and it was rocketing up the crypto ranks. 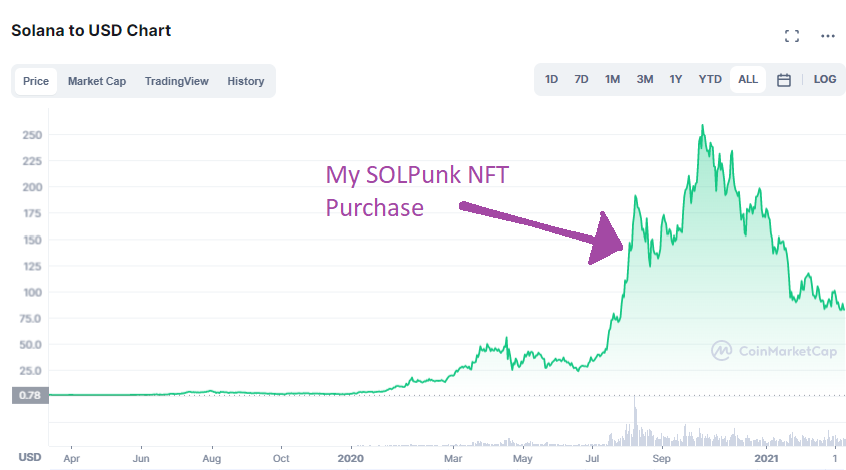 I was late, but I still caught part of the wave. Solana soon doubled again, trading above $250 and hitting a dizzying market cap of $78 billion in early November. It was now the third biggest crypto, behind only the royalty of Ethereum and Bitcoin.

The proof of history mechanism had me convinced that this had a real shot of actually doing the unthinkable – solving the problem of scalability that has plagued Ethereum. The low transaction costs and ease of use that this allowed was just so seductive, I was absolutely loving every minute I spent using the network. Continued endorsement from much-respected FTX boss Sam Bankman-Fried fuelled further hysteria, and it was official: Solana was the cool kid on the block.

Today, it looks a little different. It has shed two thirds of its value, its market cap now $26 billion. And sure, the entire crypto market has fallen from those highs, so it was always going to lose some value. But Solana has been one of the biggest losers – nearly falling out of the top 10 entirely.

SOL is like the main character in every American high school movie: he was the jock; the high school quarterback; he was dating the most popular girl in school. But he threw away his scholarship, swapped football for drinking and now he works for the nerdy kid he used to bully.

So, what happened? Well, the outages have killed it. Solana suffered six – yes, six – serious outages lasting longer than eight hours in January. The downtime was blamed on high network congestion resulting from excessive duplicate transactions, as well as heightened volatility in the market leading to bots crowding in to feed on leveraged liquidations. But the reasons really don’t matter – it’s simply unacceptable for a coin of this size to go offline for that long.

With markets crumbling, investors were unable to sell their positions because the transactions because the netword was down. They simply had to sit there and watch their Solana bags become less and less valuable. Ye, that’s not going to endear you to the market. 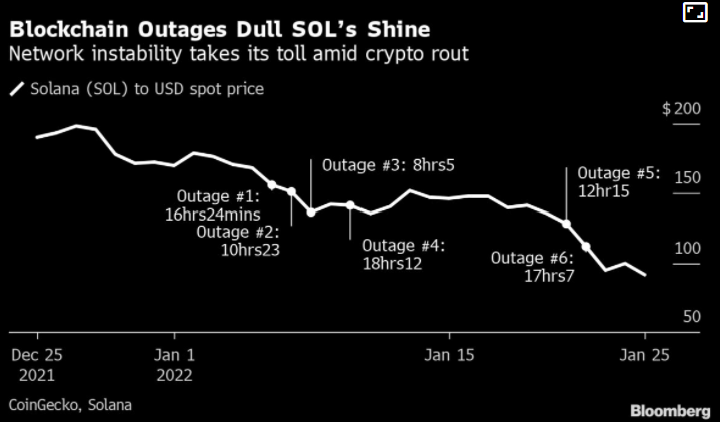 Not a pretty sight, chart via Bloomberg

The market previously believed Solana was on the way to “solving” scalability, but the demand for transactions had now seemingly reached the limit of what the network was capable of. Ethereum may be expensive, but at least it doesn’t shut down. Also, it doesn’t exactly stoke confidence when the founder of Solana responds to these critical outages with “lol”. 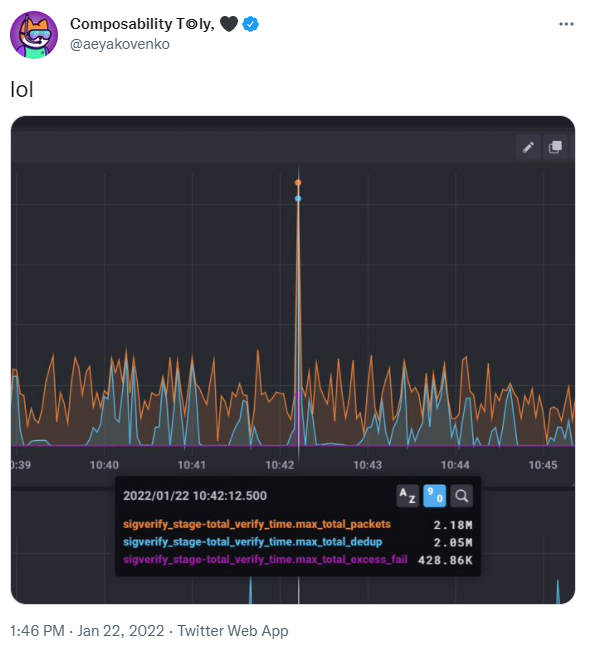 I still believe Solana offers value. Obviously, a lot of people have lost hope with it, given their portfolios were negatively affected when they could not sell positions during the outages. That confidence has gone, and it’s a long road ahead to regain it. The devastation of that impact simply cannot be overstated.

But Solana still is performing well compared to other chains. The transactions per second it processed leading up to the outages was still greater than all the other major blockchains (comfortably so). There is something here.

The price fall was justified – it certainly does not deserve to be a top 3 coin right now, and its run upwards seems naïve and premature in retrospect. But if it were easy, every chain would be processing over 5,000 transactions per second. It’s not. Solana will keep building and improving – it’s closer to its goals than most. The team remains committed, and like I said, its transactions per second is already strong. Now at a $26 billion market cap, the market has flushed out the hysteria adn the price seems fair. I’m excited to see where it goes next.

Cardano’s Hoskinson discusses the future he envisions for DeFi

DeFiChain, the world’s leading blockchain built on the Bitcoin blockchain has announced that it has added four new…

Choose your language:The projects are united by their common vision for true decentralisation in the MetaverseMetaverse staking protocol…